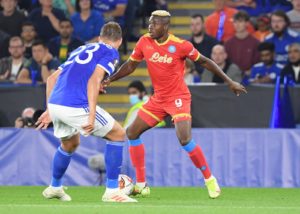 There is a new leader in Napoli and his name is Victor Osimhen, as the Nigerian striker bagged a brace at the King Power Stadium on Thursday night to cancel a two-goal lead for Leicester in the Europa League Group C opener.

Napoli approached their trip to Leicester with the right mindset but the Foxes managed to punish every single mistake the Partenopei made, lifting themselves to a 2-0 lead with goals from Ayoze Pérez and Harvey Barnes before Osimhen would help his side to storm back and deliver a precious point to the visitors.

For his Europa League overture, Luciano Spalletti made a few changes compared tohis winning effort against Juventus on Saturday. Amir Rrhamani replaced Kostas Manolas in defense and Kevin Malcuit took the right back spot, with Giovanni Di Lorenzo moving to the opposite flank. In the Azzurri‘s 4-3-3 setup, Hirving Lozano was preferred to Matteo Politano to support Victor Osimhen and Lorenzo Insigne on the front line.

Napoli’s approach to the game was promising, with Osimhen testing Kasper Schmeichel within the first five minutes. But Leicester were quickly to organize themselves and, as soon as they hit the gas, Napoli had no answers to their offenses. David Ospina had to go above and beyond to deny Harvey Barnes from point blank range but couldn’t do anything on nine minutes as Ayoze Pérez converted a cross from the former into the Foxes’ lead, talking advantage of the Partenopeidefense’s bad positioning.

Napoli weathered the storm and attempted a reaction that was all in Osimhen’s initiatives. On 20 minutes, the Big Nigerian freed himself from his marker with a brilliant faint and went for a shot that missed the goal target. On 28 minutes, he produced himself in a spectacular acceleration to dash past Timothy Castagne and serve Kevin Malcuit on the right hand side, but the 30-year-old’s conclusion was simply dreadful.

After Ospina made a shiver run down Luciano Spalletti’s back with a suicidal pass in the build-up that risked giving Leicester a big chance, it was again Osimhen to lead a sortie into the opposition box, serving a fine pass that Piotr Zielinski should have made better use of. In the meantime, Lorenzo Insigne started to adjust his aim with two shots that ended just a few inches far from the goal target.

On 44 minutes, Malcuit whipped a cross into the box for Hirving Lozano, whose header was powerful but not angled enough to put Schmeichel in trouble. At half time, Leicester were holding onto their lead but Napoli surely deserved more.

Leicester coach Brendan Rodgers understood that he had to change something. He began from two of his men, as Youri Tielemans and Caglar Soyuncu made their entrance after the restart.

That was a right intuition as it was the Belgian midfielder to serve the last pass for Patson Baka’s second goal, which was however disallowed for offside. The Neapolitans, too shy when defending from Leicester’s four-pass exchange in the occasion, were saved by the VAR.

On 62 minutes, it was time for a double change for Napoli as well. Matteo Politano replaced Lozano, while Elif Elmas took Zielinski’s place. But there was not time to take advantage of any as, right after them, Leicester made it two – this time for real, with no offside flag raised. The Foxes recovered a ball in midfield and Kelechi Iheanacho conjured a fantastic filtering pass for Barnes, who made no mistake from it.

Still, Osimhen didn’t want to hear it. The Nigerian continued to fight light a gladiator and, six minutes later, used all his strength to best his marker Jannik Vestergaard and put the ball into the back of the net with a lob, making it 1-2.

Spalletti pulled out Insigne and replaced him with Adam Ounas, switching to a 4-2-3-1 formation. He then also added Andrea Petagna and Juan Jesus for the final assault, reshaping his side in a ultra-offensive setup.

But it was still him, Osimhen, to put the cherry on top of his terrific performance, jumping higher than Soyuncu on 87 minutes to head the ball home a Politano cross and draw level for the Partenopei.

Napoli wanted even more than that as they were now playing with all the confidence on their side while Leicester seemed to have no fuel left in the tank. The score, however, remained set a 2-2 despite the Partenopeigaining a one-man advantage after Wilfried Ndidi saw red during stoppage time. And, all in all, they can be happy with it.