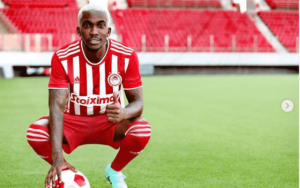 Nigeria international Henry Onyekuru is finally hoping to put down roots in Piraeus after joining Greek giants Olympiakos on a four-year deal from French side Monaco, making it his seventh move in four years.

The 24-year-old winger, who had previously played in Belgium and Turkey, is keen to kickstart his career with Greece's most successful club after failing to settle down in the French principality.

"I must admit that I've moved a lot in the last few years and I definitely need stability for a longer time," said Onyekuru, who joined Olympiakos in a €5 million euros deal.

"I have joined the biggest team in Greece, competing regularly in the European Champions League and targeting major titles; so the plan is to make a big contribution and win trophies here."

Onyekuru made only eight appearances in his three years with Monaco and was sent on loan by them twice to Turkish club Galatasaray, who provided him with a platform for regular football.

The coach of the record 22-time Turkish champions, Fatih Terim, was disappointed that Onyekuru has moved to Greece.

"I love Henry and we brought him in when no club wanted him," Terim said.

"The outright purchase option from Monaco was €9 million euros and half of it was €4.35m and yet he went the other way [Olympiakos] for €5 million.

"We also wanted him at Galatasaray, but sometimes it just doesn't happen.

"We have to accept that it is the nature of football transfers and it did not happen.

"The previous management also wanted to buy him from Monaco but it was in the middle of an administrative change, so I can understand the challenges.

"We all love him and very much wanted Henry here, but sometimes it doesn't happen due to the dynamic way of transfers."

Having started his career at Qatar's Aspire Academy, Onyekuru hit the headlines with KAS Eupen where he scored 30 goals and provided 11 assists in 60 matches.

His 22 goals for the Belgian top-flight club in the 2016/17 season attracted interest from French giants Paris St-Germain and he successfully completed a medical in Paris, before opting instead to join Everton in June 2017.

Onyekuru failed to make a competitive appearance for the club due to work permit issues.

Now he wants a return to the stability he found in two seasons with Eupen, based in the province of Liège.

"I had interest from elsewhere, but I wanted to challenge myself all over again and Olympiakos gives me that opportunity," Onyekuru told BBC Sport Africa.

"Olympiakos is very popular in European football and two Nigerians [Michael Olaitan and Brown Ideye] have played here and they've always said a lot of good things about this club.

"I've seen the huge success story in the trophies on display, plus the facilities is amazing and the people here are quite warm and positive.

"I have the experience of playing in different leagues, especially in Belgium where it all started for me.

"I believe I can bring a lot of that to the team; enjoy my football again and help the club achieve its goals."

Olympiakos won the Greek Super League for a 46th time last season and face Ludogorets 1945 of Bulgaria in the first leg of their Champions League third qualifying round on Tuesday.

Onyekuru's new side will then play either Rangers of Scotland or Malmo of Sweden in the Champions League play-offs if they defeat Ludogorets in their qualifier.

The winger has scored once in 13 appearances for three-time African champions Nigeria.

He was part of the Nigeria at the 2019 Africa Cup of Nations that finished third in Egypt, with his solitary appearance coming as a late substitute in the semi-final defeat to Algeria.

Onyekuru on the move: