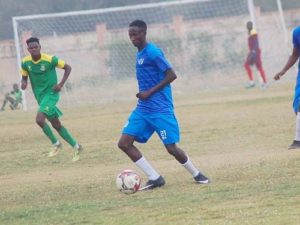 Gidado who made his Nigeria Professional Football League (NPFL) debut this season, has featured in all Jigawa Golden Stars’ games so far in the on-going campaign and should be in contention as his side faces Wikki Tourists in Bauchi today.

The 16-year old star, who scored his first league goal against Dakkada FC in the match day two in Uyo, was instrumental in his side’s vital 3-1 away win over Abia Warriors last week in Aba.

Okemiri was marvelled with Gidado’s impressive performance in the victory over the Umuahia-based outfit, insisting that the boy has all it takes to take his game to a higher level.

“I am really impressed with his performance in the game against Abia Warriors. The performance was 80%. He came on in the second half and he changed the game. It was 1-1 when he entered and the game ended 3-1,” Okemiri, who was part of the squad that won CAF Champions League with Enyimba in 2003, said.

He added: “I am really impressed with the boy. He needs a little bit of encouragement and he can still do better. He is still a young player and he has all it takes to carry on. He is a good player and a box-box player. He has age on his side and if he can continue like this the sky will be his starting point. I am really impressed with his progress and what he is doing with his career.”

Gidado made his NPFL debut for the Northern club side against Sunshine Stars in their home game in Kaduna in one of the opening Match Day 1 fixtures.