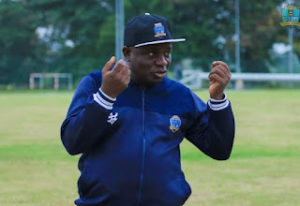 After clinching a bronze medal feat at the 2022 CAF Champions League two weeks ago in Morocco, the Prosperity Girls kicked off its title defence on a fine note against the Jewel of Rivers at the Samson Siasia Stadium, Yenegoa.

And Coach of the Yenegoa-based side, admits his side opening day triumph at home did not come easy, while stressing that they will take their bid to retain the league diadem one step at a time.

“I wasn’t surprised with the result. Rivers Angels are a very good side, especially a team that is handled by Edwin Okon who is my senior in coaching,” Okara told nigeriafootball.ng

“We learn from him, in fact, I knew it was going to be a very difficult game. I was somehow jittery because we went on holidays after the Champions League and most of my girls were down with malaria and typhoid.

“I informed my club Chairman to see if we can shift the match but it wasn’t possible. I knew it was going to be difficult but was very glad we won. Every team in the league has a chance and are good. No team is pushover. We will take the league step by step, but I would really love to go back to the continent.

Flourish Sabastine was influential in the Bayelsa’s second-half goals from Juliet Sunday and Mary Aderemi and Okaro lauds the superb effort of the U20 prodigy, while reflecting on their first half struggle.

“We have believe in her (Flourish Sabastine) and had a lot in her for the future. My team didn’t play well in the first half. We were a shadow of ourselves,” he hailed.

“I was so furious with them. We were a little bit lucky. If Rivers Angels had taken their chances in the first half, maybe we wouldn’t have won this match.”

Bayelsa Queens will on Wednesday 12th December 2022 play Heartland at the Samson Siasia Stadium Yenegoa in the their second league game.