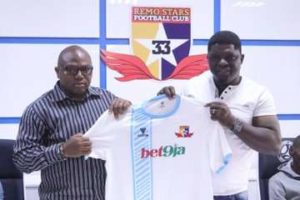 Just as reported, Nigeria Professional Football League club Remo Stars has announced a new Head Coach that will be in charge of the team for the 2022/2023 league season, Nigeriasoccernet.com reports.

The 'Sky Blue Stars' finished 3rd on the log last season under coach Gbenga Ogunbote but the gaffer left the club at the end of the season.

Remo Stars on Friday unveiled Daniel Ogunmodede as the new coach of the team for the new season.

The newly appointed gaffer will have his hands full as Remo stars will be playing in the CAF Confederation Cup apart from playing on the domestic scene.

Ogunmodede is not new to the terrain having handled the team during their days in the Nigeria National League and was responsible for their promotion to the elite division.