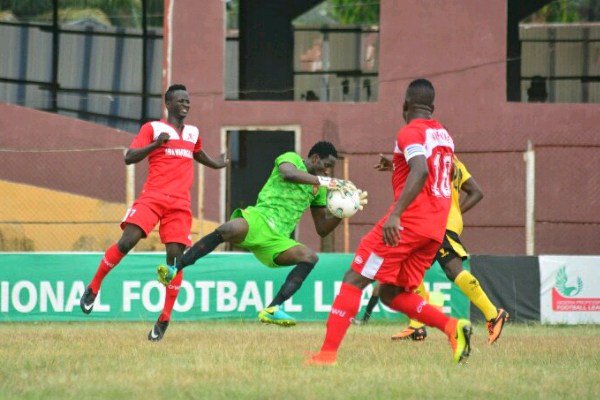 Lobi Stars maintained top spot in the Nigeria Professional Football League despite going down to a 2-1 defeat against Nasarawa United in their matchday 13 fixture at the Lafia Township Stadium on Sunday.

Solomon Ogbeide’s men got off to a flying start when former MFM forward Austine Ogunye put them ahead from the spot in the fifth minute after Mannir Ubale was fouled in the box.

Both teams were reduced to 10 men in the 53rd minute after Anthony Okpotu and Mohammed Manga were sent off for engaging in a brawl.

Third-placed Yobe Desert Stars also went down to a 2-1 defeat against struggling Sunshine Stars at the Akure Sports Complex.

The visitors scored the curtain raiser through Babatunde Solomon in the 17th minute, while Bala Yahuza restored parity from the spot awarded after Dayo Ojo was impeded in the box.

Sikiru Alimi got the winner from a sublime header a minute after the half hour mark.

El-Kanemi Warriors boosted their survival hopes with a 1-0 win against FC IfeanyiUbah in Maiduguri.

Former Enugu Rangers striker Ocheme Edoh got the winner from close range in the 33rd minute after he was set up by Samuel Mathias.

At the Muhammadu Dikko Stadium, Katsina United edged out Heartland 1-0 with Lukman Mohammed scoring the decisive goal from the spot after three minutes.