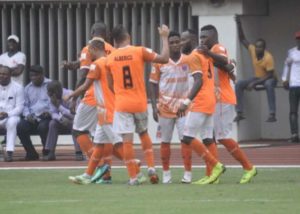 Ubong Friday gave Akwa United the lead seven minutes before the break, while Nasiru Jubril doubled the advantage in the 69th minute.

Akwa United top the standings with 45 points from 25 games.

Kano Pillars dropped to second position on the table after a 0-0 away draw against Plateau United at the New Jos Stadium.

In Aba, Enyimba and Heartland battled to a barren draw in a thrilling contest, while the other oriental derby between FC Ifeanyiubah and Rangers also ended in a 0-0 draw.

Oladapo Alabi netted the winning goal in the 68th minute.

It was the visitors who took the lead through Ugonna Uzochukwu on 15 minutes.

The visitors however rallied through strikes from John Lazarus and Ossy Martins.

Sunshine Stars are now winless in their last 15 league outings.