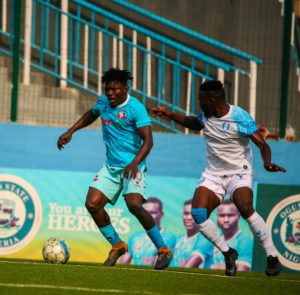 It was another win for Remo Stars of Ikenne in the Nigeria Premier Football League, NPFL during their match day 3 encounter against Shooting Stars Sporting Club of Ibadan on Wednesday.

An own goal by Alex Aghahowa and a goal from Godwin Odibo in the second half gave the Sky Blue Stars their third consecutive win of the 2022/2023 season.

It was a match were the home team pretty dominated with more zest and flare to score, but no record was recorded in the first half.

Though the real chance that the 3SC team had in the first half was ruled for free kick after an infringement in the box 18 before the ball was headed into the net in the 20th minute.

In the second half, a fine play saw Andy Okpe's cross turned into the net by Aghahowa of Shooting Stars to make score 1-0 in the 60th minute.

Substitute, Odibo put the incing on the cake ten minutes later after a through ball which he calmly put in the left corner of the net with his left foot.

The score remained that way till the end as Remo Stars took their third win in three matches with no goal conceded yet to keep the 100% run in tact.