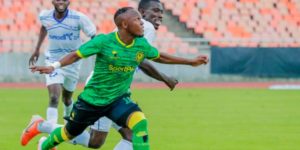 United were winners of the Nigeria Professional Football League for the first time in August. Still, they sanctioned the exit of some of their stars, including the sale of Olisa Ndah to South African side Orlando Pirates.

And it was no surprise to see the Kennedy Boboye-tutored side struggle for the most part against their Algerian counterparts.

That was until Ubong Friday struck with three minutes left of regulation time to hand the Uyo-based side a slim advantage ahead of the return leg in Algeria next weekend.

In Tanzania, Rivers United gave a good account of themselves as the Stanley Eguma-managed club carved out a 1-0 win over their hosts Young Africans inside the Benjamin Mkapa National Stadium In Dar-es-Salaam.

The Tanzanians created several chances in the encounter, but the Pride of Rivers gave as good as they got. And the Nigerians proved to have the needed quality as Moses Omodumuke’s 51st-minute goal settled the closely fought clash.

Rivers United will hope to finish the job when the two sides meet again in the second leg at the Yakubu Gowon Stadium in Port Harcourt.