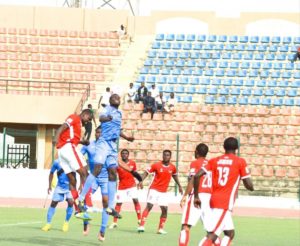 Akwa United extended their unbeaten run in the Nigeria Professional Football League to six games after they were held to a 2-2 draw by their hosts Gombe United in a rescheduled fixture at the Pantami Stadium on Sunday, reports Completesports.com.

Musa Usman gave the home team the lead from a long range effort four minutes before the half hour mark.

Substitute Emmanuel Charles restored parity for the visitors 12 minutes later when he nodded the ball home from a tight angle.

Akwa United took the lead for the first time in the game when Mfon Udoh headed the ball home six minutes from time.

Udoh has now scored seven goals for the Promise Keepers in 10 league outings this season.

Gombe United however rallied back to earn a share of the spoils with Usman Musa converting from the spot two minutes from time.

In Makurdi, Champions Lobi Stars were held to a 1-1 draw by visiting Katsina United.

Martins Usule volleyed home in the 12th minute to hand Kastina United the lead in the keenly contested encounter.

The hosts levelled scores from the spot in the 68th minute awarded after substitute Stephen Micheal was fouled in the box.

Lanre Runsewe put Remo Stars ahead on 20 minutes after he was set up by Dare Shokunbi.

Remo Stars captain Victor Mbaoma netted the winning goal for his side from the spot a minute before time.

Kabiru Sanusi gave Kada City the lead with a firm header from close range in the 18th minute.

Philip Auta levelled scores for Yobe Desert Stars with a well placed header from from a delightful cross from Chinedu Solomon three minutes after the break.

Kabir Sarki got the winner for the hosts from a header two minutes before the end of the game.

Bendel Insurance and former champions Enyimba battled to a 0-0 draw at the University of Benin Sports Complex, Benin.