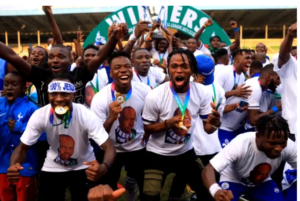 This announcement was made less than a week after the conclusion of the 2021/22 season which produced Rivers United as champions.

With Kano Pillars, MFM FC, Heartland FC and Kastina United relegated, the remaining 16 teams alongside newly promoted sides from the Nigeria National League will justle for honours, continental ticket as well as battle for survival from the 23rd of September 2022 till June 18, 2023.

There will be no midweek matches as CAF competitions and Aiteo Cup games have been scheduled for the midweeks.

Remember Bendel Insurance and Doma United have their place in the NPFL for next season, and with two games left to the end of the NNL, the Northern Conference and Southern Conference are too produce one more team each to complete the number of promoted teams.

Also, the NPFL general assembly of the LMC and club owners will hold on September 16 just before the season commences.