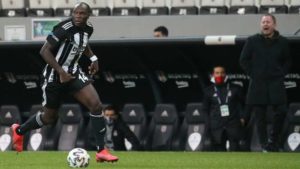 The Mrsool Park outfit disclosed that the former Porto and Lorient striker has penned a three-year contract that will keep him in Riyadh until 2024.

Aboubakar left Besiktas at the end of his contract on May 31, after helping the Black Eagles win the Turkish Super Lig and the Turkish Cup.

He played a crucial role in Sergen Yalcin’s title-winning squad with his contribution of 16 goals in 29 matches across all competitions in the 2020-21 campaign.

As a result of his switch to Saudi Arabia, the 29-year-old becomes the third African star in Mano Menezes’ team alongside Morocco duo Abderrazak Hamdallah and Nordin Amrabat.

“The management of the Saudi Al-Nasr Club officially signed with the Cameroonian star Vincent Aboubakar and that was during a free transfer deal and with a contract that extends for three years, with best wishes for the success of the international star,” the club statement read.

Aboubakar has enjoyed playing stints in France, Portugal and Turkey since he started his professional career in Cameroon-based club Coton Sport in 2009

A year later, he joined Valenciennes in Ligue 1 where he spent three years before joining rivals Lorient on a free transfer in 2013.

Following his outstanding record of 16 goals in 35 Ligue 1 matches, Aboubakar made a move to Porto in 2014 where he enjoyed a hugely successful time. During his stay at the Estadio do Dragao, the Cameroon international won two Primeira Liga titles, one Super Cup and the Portuguese Cup.

He had two spells at Besiktas – firstly in the 2016-17 season and he won the Super Lig crown before returning last September on a short-term deal to help them to another top-flight crown.

On the international scene, Aboubakar was not present in Austria for Cameroon’s double-header of friendlies against Nigeria but he will be expected to make Toni Conceicao’s squad when the Indomitable Lions begin their 2022 Fifa World Cup qualifying campaign in September.

Thanks to Andre-Frank Zambo Anguissa’s strike, Cameroon first defeated the Super Eagles 1-0 last Friday before both teams settled for a goalless draw at the Wiener Neustadt Stadium on Tuesday.