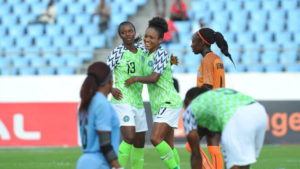 The vice president of Nigeria Football Federation, Barrister Seyi Akinkunmi says he’s committed to the development of women football in the country and will continue to do so.

Akinkunmi who also doubled as the Lagos State Football Association Chairman made this known while speaking with the Football Fans Club of Nigeria on Instagram live chat on Tuesday.

Akinkunmi and other top officials of The Nigerian Football Governing Body bigwigs have been accused of not showing enough interest in developing women football in the country but Akinkunmi has refuted such claims.

He insisted he will continue to support women’s football, irrespective of the unfair criticism leveled against him.

“If you are in the public light, some people will be mischievous and you will get discouraged at some point or the other but I think that the work I do and the passion I’ve shown towards women football has clearly negated any misgivings that people might have about whether I am anti-women Football or have an adverse view of it or I’m prejudiced against it.”

“Even if you ask the female footballers themselves, the ones who are already in place and the ones who are upcoming, those we have supported to get professional, they will tell you that you are talking about somebody else if you quote those things so I’m quite happy, it doesn’t bother me, not in the least bit.” He said.