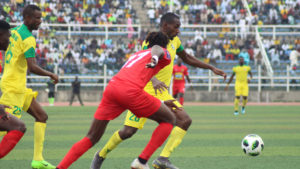 The president of the Nigeria Football Federation, Amaju Pinnick, has thrown a challenge to the clubs representing the country in CAF Club competitions to redeem their images following the string of poor results recorded in their first-leg games.

Pinnick, who spoke on varying issues as he clocks 50 years old, said he was disappointed by the unpleasant results posted by Plateau United, Kano Pillars, and Rivers United, but he was full of praises for Enyimba who made the country proud with their away win against Burkina Faso champions Rahimo FC.

According to Pinnick, even though there is a delay in the commencement of the Nigeria Professional Football League, it is not enough reason to justify the poor results posted by most of the country’s flagbearers on the continent.

He said: “I am very disappointed. In as much as we can point to the fact that the League has not started, there is something called the ‘Nigeria spirit’ and we expect teams flying Nigeria’s colours to have that in them.

“I am at a loss as to how Kano Pillars could be playing away from home, and they led their hosts, only to collapse to a 3-1 defeat.

“Nigerian teams should be made of sterner stuff. I commend Enyimba FC that won away against their opponents in Ouagadougou; that is the way to do it.” Pinnick added.

Though many have given up hope on the Nigerian teams progressing with the poor first leg results, the NFF boss has thrown a challenge to the four teams to prove their doubters wrong with a better second leg performance.

“My challenge to the other clubs is to turn things around in the return legs and qualify for the next rounds of the CAF Champions League and CAF Confederation Cup competitions,” Pinnick concluded.

While the trio of Enyimba, Rivers United, and Kano Pillars will be returning home for their second leg games, Plateau United have a tougher task of upturning the 1-0 home loss they suffered in Jos when they take Simba FC in their second leg tie in Dar es Salam.