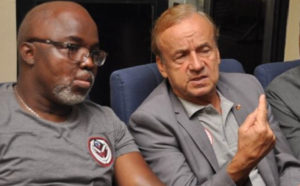 Reports circulated several media outlets that the Franco-German tactician was owed three-months pay, but the NFF has now denied the reports and claimed Rohr is only owed September salary.

“The NFF wishes to put records straight with regards to a claim in the social media on Friday, 11th October 2019 that the football house is owing Super Eagles’ Technical Adviser, Gernot Rohr, three months’ salary.

“As we speak, Mr. Rohr is only being owed salary for the month of September 2019, which is being processed,” the NFF said on Twitter.

Rohr will lead the Super Eagles out in an international friendly against Brazil billed for Singapore on Sunday.