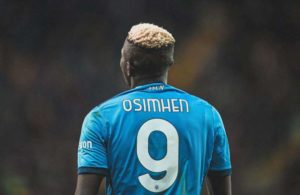 A few days after a hilarious tweet suggesting he is looking forward to a possible ‘wedding’ this December, Victor Osimhen has dropped another message on his timeline, causing a bit of a stir on the microblogging site, Twitter.

The Napoli striker, who recently returned to training after a nasty injury on Wednesday, wrote: “I Know Say We Agreed On Friends With Benefits, Which One Kon Be Say You Don Dey Fall In Love With Me” – an expression suggesting acquaintances going beyond set territories of engagement.

As always, Osimhen got his fans divided, with some enjoying the ‘joke’ while others frowning at the perceived ‘uncouth’ attitude of the striker on social media.

One of the replies on Osimhen’s tweet advised the Napoli striker to get an adult to handle his social media account and that did not go down well with the 22-year old who replied angrily, as he wrote:

About a week ago, Osimhen made a swift return to training after suffering a facial injury in a league game in the Italian Serie A.

Osimhen suffered a left cheekbone and orbital fracture in Napoli’s Serie A clash against Inter Milan on November 21.

The 22-year-old went through a successful but complicated surgery afterward.

He is now getting set to return to action for Napoli and also in the mix to return for the Super Eagles ahead of next month’s AFCON tournament in Cameroon.