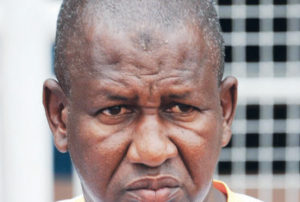 Plateau United boss Abdul Maikaba has called on the relevant authorities to lift the ban on football for them to resume early preparations for the Caf champions league.

In a chat, he stated that Plateau United’s bid to reach the semi-finals of the CAF Champions League next season requires adequate preparations amongst other things.

However, the restriction on contact sports in the country due to the Covid-19 pandemic has ensured on-field preparations are yet to get underway as the players are not permitted to even train.

“We have to start our preparation as early as possible, and the way things are going, the government hasn’t given permission to start training. It is going to be very difficult,” the former Wikki Tourists handler stated.

“I don’t want a situation whereby all our opponents are there preparing themselves for the CAF Champions League, (and) we are still here waiting for the government to give the go-ahead to even start training.

“So, we actually need the support of the government, especially the four clubs (Plateau United, Enyimba, Rivers United and Kano Pillars) that will represent Nigeria. They should give us that support to actualize our objective.

“If we don’t get that support, to start our preparation early, I don’t think reaching our target is going to be possible.”