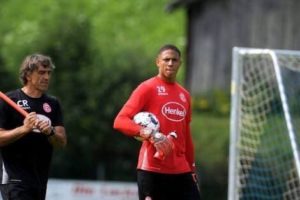 Uzoho looks set to start for the Super Eagles in the friendly game against Ukraine ‎following his fine run of form for Omonia Nicosia since his loan move from Spanish second division side Deportivo La Coruna in the summer.

While that is not in doubt, Rohr has however said Okoye will in the nearest future push to become the first choice as the 20 year old has what it takes to be the man between the sticks for the team if he continue to work hard.

” I like what I saw of him in the games we scouted him. He has the quality to become the first choice of the Super Eagles if he continue to work hard. Still not there yet but he is not too far off. Hopefully he will come good for us”, Rohr said.

So far Okoye has kept two games in the German fourth division for Fortuna Dusseldorf II and after conceding just once against Schalke 04 II, he conceded four goals against Borussia Dortmund II as his side slumped to their first defeat of the season