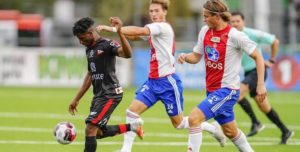 Lorient forward Taofeek Ismaheel has suffered a horrible knee injury that may keep him out of competitive action for the rest of the campaign.

Taofeek Ismaheel has been on a temporary stay at SK Beveren, having joined the Belgian second-division side on loan on August 10.

Unfortunately, the 22-year-old landed awkwardly and twisted his knee in the second half of Beveren’s straightforward 2-0 win at home to Beerschot in a Challenger Pro League clash on Sunday.

The win sent Beveren to the top of the league table, putting the Wim De Decker-tutored in a good position to achieve their promotion target.

But the injury to Ismaheel punctured the joy of the home team and manager Wim De Decker confesses that the Nigerian forward’s knee looked terrible and the player may be on the treatment table for a long time.