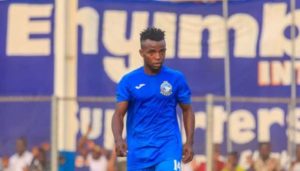 The former MFM FC midfielder part company with Enyimba FC a few days back, just twelve months after signing for the club.

Onuwa busted into the scene back in 2015 with the MFM FC and his combination with Stephen Odey and Sikiru Olatunbosun helped the club finished second in Nigeria professional football league a year later.

However, he has encountered a few set back since moving to Enyimba and the main aim is to join a new team where playing time is guaranteed.