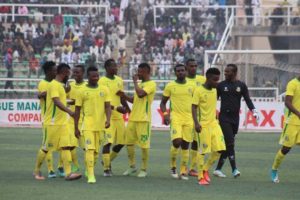 Kano Pillars and Wikki Tourists will trade tackles today in a must win NPFL week 37 match at the Ahmadu Bello stadium Kaduna.

Yesterday, Akwa United clinched the 2021 NPFL title with one round of matches remaining, leaving the remaining two continental tickets for the quartet of Nasarawa United, Enyimba, Kano Pillars and Rivers United to fight for.

Kano Pillars who have dropped to the fourth position with 61 points must avoid defeat or draw with Wikki Tourists, if they are to stand any chance of beating either Enyimba or Rivers United to one of the tickets.

If Pillars win against Wikki Tourists and both Nasarawa United and Enyimba lose or draw, the 'Masu gida' boys will storm to second position with 64 points.

However, in the event that Nasarawa United win and Enyimba lose or draw, then Kano Pillars will move to third position, if they win against Wikki Tourists.

It is, therefore, a must win match for Pillars but they are meeting Wikki Tourists at a difficult time because the 'Bauchi elephants' also need the maximum points to stand any chance of surviving the drop.

Wikki Tourists are on 41 points and hovering around relegation zone. If they can get at least a point against Pillars, they may escape relegation on the last day of the season when they host already relegated Adamawa United on Thursday.