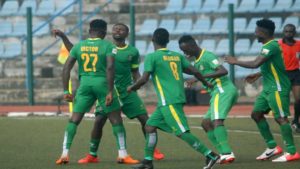 Sai Masu Gida have qualified for Caf inter-club competition after their slim win over the Pride of Benue in the Super Six.

Kano Pillars narrowly missed out on the NigeriaProfessional Football League (NPFL) title but they held on to secure the second ticket for the Caf Champions League.

This was after they pipped previous champions, Lobi Stars 1-0 in the concluding fixture of the Championship play-offs in Lagos.

Sai Masu Gida were aware of their fate even before the start of their encounter with the Pride of Benue, because Enyimba had won the league crown after they defeated Akwa United 3-0 in a one-sided affair earlier in the day

The Kano Pillars game started at a fast pace with both teams sizing up each other but it was goalless at the end of the first half.

At the inception of the second half, Kano Pillars started with urgency but their efforts didn’t yield any dividends until the centre referee handed them a lifeline when a Lobi Stars defender was adjudged to have committed an infringement in the box in the 73rd minute.

The three points took Kano Pillars to 11 points from five games and cemented second position on the table.