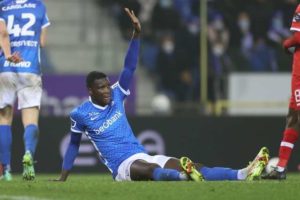 Injured Nigeria's Super Eagles striker Paul Onuachu has fully recovered from his injury that has kept him out of action for Genk before the start of the Belgian League season.

The lanky forward missed Genk's two league games against Club Brugge and Standard Liege due to an abductor injury.

According to report coming from the club, Onuachu has recovered and he's set to return to action on Saturday when Genk face Eupen.

"It is difficult to estimate how fit he is," said Wouter Vrancken on his press chat.

“He played 45 minutes against Heist and he feel no pains anymore," he added.

He was named in the team for weekend game but the coach will decide who starts as his countryman Cyril Dessers has hit the top form scoring three goals and making an assist for the team.