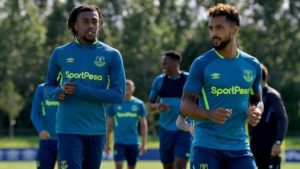 Iwobi linked up with the Toffees last week Thursday from Arsenal in a deal that makes him the most expensive Nigerian player ever.

He was not part of the Merseysiders’ squad for Premier League clash against Crystal Palace last Saturday as he was yet join in their training session.

The 23-year-old had been on extended holiday after his involvement with Nigeria at the 2019 Africa Cup of Nations in Egypt where the Super Eagles won the bronze medal.

Everton posted a short video of Iwobi and his former Arsenal teammate, Theo Walcott on Twitter as they stepped onto the training pitch with a short message..

Iwobi will look to get into good fitness in time and make his debut for Marco Silva’s side when they host Watford at the Goodison Park on Saturday.