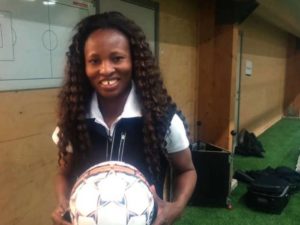 Former striker Perpetua Nkwocha says she’s not interested in the coaching Super Falcons of Nigeria at the moment.

The Falcons are currently without a coach since the exit of Swede tactician Thomas Dennerby and there have been suggestions for ex-international to be appointed as his replacement.

Nkwocha who is four times African Female Footballer of the Year has now ruled herself out of the job and stated that she is presently preoccupied with the club coaching job in Sweden.

She however admitted that she might take up the national team’s coaching job in the future.

The former Falcons striker advised that a minimum of a five-year deal be given to coaches of Nigeria’s female national teams to enable them to make more impacts on the teams.