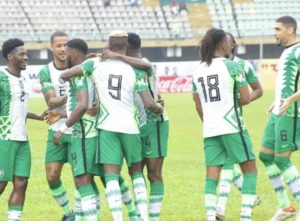 The Super Eagles of Nigeria beat Liberia 2-0 courtesy of Leicester City striker Kelechi Iheanacho, who scored twice for the hosts during their Qatar 2022 World Cup Qualifier at the Teslim Balogun Stadium in Surulere, Lagos.

Nigeria got off to a good start in the qualifiers with a win in front of their home fans. The Super Eagles currently tops Group C following their 2-0 win over Liberia.

The Super Eagles will battle Cape Verde in their next encounter in four days time as they hope to keep the  momentum for the rest of their qualifiers.

The Super Eagles of Nigeria will be looking to earn a seventh FIFA World Cup finals appearance when they trade tackles with the Lone Stars of Liberia at the Teslim Balogun Stadium in Surulere, Lagos.

Since making its debut at the FIFA World Cup finals in 1994, the three-time African champions, Nigeria, have only missed participation in the finals once – the 2006 edition in Germany. They were denied of that berth courtesy of CAF’s head-to-head rule that favoured Agnola.

Leicester City star Wilfred Ndidi will marshal the Super Eagles’ midfield given his strength in the middle of the park, supported by Joe Aribo and Alex Iwobi. Kelechi Iheanacho, Moses Simon and Victor Osimhen will be leading the Super Eagles attack.

Liberia have never reached a FIFA World Cup finals, although they came close to doing so in the 2002 Korea /Japan World Cup tournament.