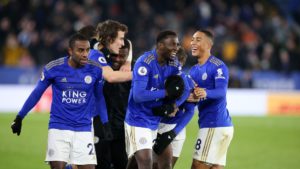 Goalscorer Kelechi Iheanacho was thrilled with the way he seized his opportunity after coming off the bench to set up one and score another in the 2-1 victory over Everton on Sunday.

The Nigeria’s first Premier League appearance of the season saw him replace Ayoze Pérez on 62 minutes before he set up the league’s top scorer, Jamie Vardy, for the leveller six minutes later.

“It was a great moment, [it was] my first game of the season and first goal, so I’m really buzzing – I’m happy today,” Iheanacho told LCFC TV.

“It all came from the hard work in training, I’ve been working hard and keeping my head up and waiting for the opportunity to come. I’m happy it came, and I took it.”

When asked about his emotions as he was about to be introduced, Iheanacho says he was always confident in his own ability as he went on to turn the game on its head.

“I was just concentrating on the game, and watching the game, and how the game was going,” he said. “When the manager said ‘you’re going to come on’, I was confident and, of course, they’re my team-mates – they know what I can do and I know what they can do.

“I know where the passes are going to come. We work together in training and we’ve been playing together, so everyone knows everybody. We’re happy that we had this great moment today.”

Iheanacho emphasised City’s togetherness at the full-time whistle, and after a sixth-straight Premier League win, he explained why every member of the squad was delighted with Sunday’s result.

He added: “To be fair, this team, starting from the players, to the staff and the manager – everyone – we are all together, so everyone is happy with each other.

“Those who are playing or those who are not playing, everyone is happy. It’s a great squad, it’s a happy place to be.

“I know everyone is happy for me, they’ve been waiting for me to do this, so I’m happy as well. We’re all happy!”