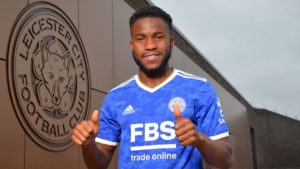 Ademola Lookman netted his first international goal as Nigeria secured a 10-0 win, their best ever international win in history over Sao Tome and Principe during the 2023 African Cup of Nations qualifiers.

The winger, who spent last season on loan at Leicester City, scored the seventh goal as Nigeria put 10 unreplied goals past Sao Tome eclipsing a 10-1 win over Dahomey, now Benin Republic,  in 1959 that had been the team's all-time record.

With his loan at Leicester City going to plan and the Premier League club preparing to trigger a buy option in his loan deal, there are different ways how the 24-year-old can be utilised at the club with the likes of Jamie Vardy, Harvey Barnes, Ayoze Perez, Kelechi Iheanacho and Patson Daka all available.

Lookman is extremely versatile and can provide competition for Harvey Barnes on the left wing while also being in contention to lock down the right side which has always looked a weak spot in Leicester's attack.

The Nigerian also has the ability to play as a second striker if need be. His low centre of gravity also makes him suitable to a more central role if Leicester are chasing a game and need to throw on more attackers.

Lookman who scored eight goals and provided five assists during his time at Leicester is a valuable asset for Brendan Rodgers to have in his squad.

The Nigerian offers a wide range of capabilities that gives Rodgers options in his tactically flexibility.