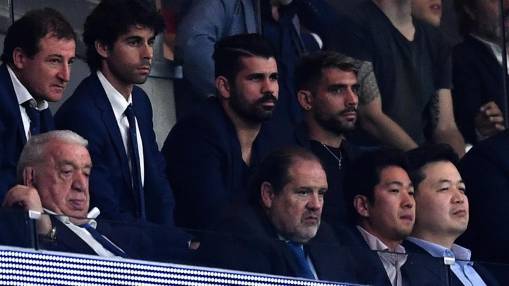 Filipe Luis has suggested that Antoine Griezmann's summer link with Manchester United was about getting a pay rise from Atletico Madrid, while adding that the France international is now settled at the club.

Griezmann had appeared close to joining United for €100 million, but eventually signed a new contract with Atletico in June, saying he could not leave the club when they were unable to sign a replacement due to a FIFA transfer ban.

Diego Costa's subsequent return to Atletico from Chelsea means Diego Simeone's side are now well stocked with forwards, and sources have told ESPN FC that United remain interested in signing Griezmann next summer.

But Filipe told El Mundo that once everyone moved on from the summer saga, it was clear that Griezmann could stay at Atletico for "much longer."

"[Griezmann] is a kid who speaks very clearly," Filipe said. "Often players talk when they feel they are not being valued as they deserve. Then they get more attention. He would have had many offers from many teams. A player of his size wants to be up with the biggest in terms of contract and value. And that is fair -- as Griezmann is doing great here.

"In the end, for all the talk about other clubs, he always wanted to stay here and he is still here, happy and liking it. For sure, he can stay much longer. We hope the fans understand this and everything gets back to normal, although he has been scoring goals, and goals cure everything."

Former Chelsea defender Filipe was also positive about Costa's return, saying the Spain international is his favourite player he has lined up alongside.

"[Costa] is the best I have played with," he said. "I have seen [Juan Carlos] Valeron do things nobody could do. Neymar and [Eden] Hazard are amazing talents, but the player who gave me most trophies was Diego Costa. He always scores the opening goal. Because it is one thing to score 30 goals with hat tricks in easy wins, and another that 20 of those 30 goals are enough to win 1-0. Nobody does that as well as Diego Costa."

There was also praise for Lionel Messi ahead of Barcelona's visit to the Wanda Metropolitano on Saturday.

Filipe also spoke about his run-ins over the years with Messi -- who has 27 goals in 34 games against Atletico -- including a red card at the Camp Nou in 2016.

"I'm always in the 'butcher' role," he said. "But the only way to stop Messi one-on-one is to foul him. Otherwise, if I'm alone, I'll only get the ball one in 20 times. I have to use other weapons, I know the best way to stop him. I know he does not like playing with his back to goal, you must be right on top of him when he gets the ball. If he feels comfortable, you're dead.

"I feel I do pretty well against him when we play, although he always scores against us. And even with me being the bad guy when we meet, he never reproaches me, always shakes my hand after the game."

In a wide-ranging interview in which the Brazil international also discussed his interest in astrophysics and religion, he said he respected the recent stance of Barcelona defender Gerard Pique, currently unpopular in some parts of Spain due to his views on Catalonia's right to vote on its future.

"I'm a fan of Pique, although often I do not agree with what he says," he said. "But at least he dares to say things. Like [ex-Real Madrid full-back] Alvaro Arbeloa, they are not afraid to say what they think, do not hide behind their fame. 'Ole' for them. I wish more players were like them."