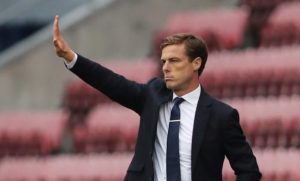 Fulham coach Scott Parker has explained exactly why Chelsea Academy product Ola Aina was not named in the match day 18 for his side's 3-0 defeat to Arsenal on the opening day of the 2020-2021 Premier League season.

On Friday evening, The Cottagers finally confirmed the signing of the Nigeria international on a season-long loan deal from Torino with a purchase option included in the contract.

Parker revealed that Aina was not considered for today's clash against the Gunners because he was recently signed.

The versatile fullback took part in two pre-season games against Novara and Pro Vercelli before heading to the English capital to join his new club.

"They probably fit into the same category as Mitro. I’m pleased that he got 30 minutes, along with Anguissa, and on Wednesday [against Ipswich Town] we can get some more minutes into these players."

Aina and Kenny Tete have been signed to provide competition for the ageing Belgian right-back Denis Odoi who went the full ninety against Arsenal.