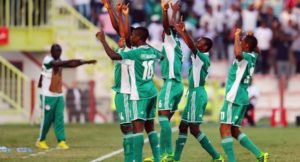 Nigeria’s under 20 team, the Flying Eagles will  arrive in Lome, Togo on Wednesday for the West Africa Football Union (WAFU) U-20 Cup of Nations.

The team was due to fly out into Lome on Tuesday, but they will now take a road trip from Lagos to the Togolese capital on Wednesday instead.

The Flying Eagles are already one day behind schedule, as their plan to travel out of Nigeria on Tuesday was scuttled at the last moment.