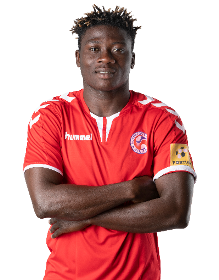 The 19-year-old has registered his name on the scoresheet three times in the Fortuna League, with the goals coming in his last nine matches in the division.

Akinyoola, who was signed from 36 Lion in September, opened his account for the season on matchday 10 against Pohronie, before scoring in back-to-back games against Michalovce and Ruzomberok in November 2019.

Just 19 years of age, Mukaru has received rave reviews from the media after breaking into the first team of Antalyaspor in his first season as a professional and one of his goals was against the big Istanbul club Besiktas back in November.

It is interesting to note that Kwara Football Academy product Ajanah-Chinedu, 19, is a central defender. He used to play for Katsina United and ABS domestically before moving to Europe.

Another 19-year-old, Tenton Yenne, a product of the famous GBS Football Academy that produced Ahmed Musa, Moses Simon and Samuel Kalu, has scored once for FK Senica while producing three assists.