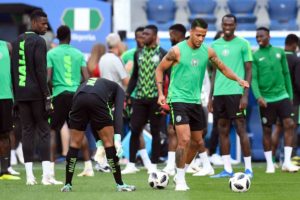 Nigeria’s coach Gernot Rohr has suffered a huge blow ahead of his side’s World Cup qualifying encounter against Cape Verde next month.

The 68-year-old coach may be without the services of Super Eagles players in England for the clash at the Estádio Nacional de Cabo Verde as Cape Verde is on the UK’S red list of coronavirus affected countries.

Travellers from the red travel list countries must stay in quarantine for ten days under the UK Covid-19 guidelines.

With the football season already in full flow, the mandatory quarantine means players from the red travel list will miss some crucial games for their clubs.

The Premier League has been working with the UK government to exempt players from the compulsory quarantine rules, but they could not reach an agreement.

And as a result, Premier League clubs, along with other members of the European Club Association, have revealed they would not release their players to play in the red list countries.

The Egyptian Football Association (EFA) confirmed today that Liverpool said they would not release Salah for their home clash against Angola on September 2 as Egypt is on the UK’s red list.

However, Salah could be available for the away clash against Gabon as the country is on the UK’s amber list. Likewise, Super Eagles players in England will be available to play the game against Liberia in Lagos on September 3 but could miss the clash in Praia four days later.

That would be a massive blow to Rohr’s plans as a large contingent of the squad play in the UK. The Super Eagles have seven players in the Premier League alone, while Semi Ajayi, Joe Aribo and Leon Balogun play in the Skybet Championship and Scottish Premiership, respectively.

The three-time African champions could now be without Alex Iwobi, Kelechi Iheanacho, Wilfred Ndidi, Frank Onyeka, Oghenekaro Etebo, Emmanuel Dennis and William Troost-Ekong for the clash against the Blue Sharks.