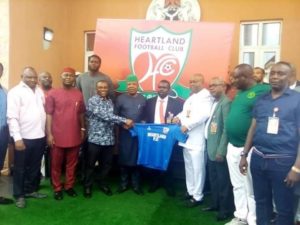 Ilechukwu was unveiled during an elaborate ceremony at the Imo State Government House, Owerri. on Monday.

In attendance at the elaborate ceremony were the Executive Governor of the State, Emeka Ihedioha; team manager, Mobi Oparaku; former Super Eagles midfielder, Henry Nwosu and other top officials of the club.

Ilechukwu turned down a lucrative offer from his former club, MFM FC of Lagos to move to the five-time NPFL champions.

The young tactician enjoyed a remarkable time in his over a decade stay with the Olukoya Boys.

Under his tutelage, MFM rose from a mere amateur club to the top echelon of domestic football in Nigeria and has maintained their status ever since.

After barely escaping relegation in their first season in the NPFL, MFM FC finished second behind Plateau United a season later and also represented Nigeria in the CAF Champions League.

He will combine his position with that of the U23 Eagles where he is one of the assistant coaches.