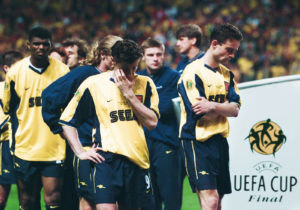 Brazil 1994 World Cup winning goalkeeper Claudio Taffarel has revealed how his former Turkish club Galatasaray, stopped Nwankwo Kanu and his super star Arsenal teammates, in the final of the 2000 Europa League  (known as UEFA Cup then).

But Galatasaray emerged shocked winners after triumphing 4-1 via penalty shootout despite Gheorghe Hagi getting sent off.

And recalling the final 20 years ago, Taffarel told FIFA.com:”I remember every bit of it. We had a great team. Every player was really good, we had a good coach. Our foreigners were excellent – Hagi was Hagi, and we also had [Gica] Popescu and the Brazilian Capone.

“Arsenal were powerhouses in Europe, but we went into that game very confident, fearless. If we’d have gone out there in fear, Bergkamp, Henry, Petit, Vieira, Overmars, Kanu would have torn us apart.

“Obviously they put a lot of pressure on us, but we defended really well, had our moments, it went to penalties and, thank God, we won. It was a triumph that went down in Galatasaray history. And we deserved it.

“It wasn’t a game in which Arsenal played badly. They tried everything they could, couldn’t get past us, and we played well. It’s something the players and the Galatasaray fans are very proud of.”

On the Champions League between Bayern Munich and Paris Saint-Germain:” think the two best teams got to the final. Paris came very well prepared, but I think Bayern had something extra in terms of their play and their set-up. I cheered a lot for Paris because of the Brazilians who play there.

“I really wanted Neymar to win this Champions League and, consequently, The Best FIFA [Men’s Player] award. But it’s just one day. I really hope in the future he can win this award and be considered the best player in the world. But I thought it was a good football game, well thought out and well played.

“It wasn’t easy for anyone, but Bayern capitalised upon their chance. I think Bayern were deserved winners.”

And when asked about the best player he saw play in his career: “Maradona. I’m a big fan of Maradona. The way he played was such a pleasure to watch – the way he fought for his team on the pitch, his incredible technique. His team-mates loved to play alongside him. I remember Careca raved about him.”