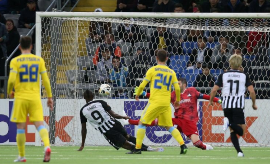 Former Nigeria U23 international Umar Sadiq continued his purple patch in front of goal as Partizan Belgrade recorded a 2-1 win at Astana on game week 2 of the Europa League on Thursday evening.

Ahead of Manchester United's trip to Belgrade on October 24, the former Glasgow Rangers striker has reminded everyone about his quality by scoring two goals.

Partizan Belgrade were 1-0 up at half-time thanks to Sadiq's maiden strike in the group stage of the Europa League in the 29th minute.

Belief disappeared from the home team in the 73rd minute after a thumping finish from the Nigerian, which ultimately settled issues for the Serbian side.

The Roma loanee could have bagged a hat-trick but Natcho chose to have an effort on goal instead of squaring the ball to the number nine in the 83rd minute, before Sigurjónsson halved the deficit five minutes from time.

In 16 outing outings across all competitions this season, Sadiq has registered eight goals and set up three others.

After two games in Group L, Manchester United and Partizan have four points each but the Serbian side top the table thanks to a better goal difference.