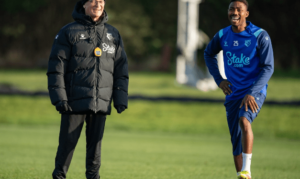 The Nigerian trio of Oghenekaro Etebo, Emmanuel Dennis, and William Troost-Ekong will be working under a new manager after Watford terminated the contract of Italian manager Claudio Ranieri on Monday.

Ranieri, who was only appointed in October, has been sacked barely three months into his tenure after a run of poor results. The Hornets did not name a replacement.

“The Hornets’ Board recognises Claudio as a man of great integrity and honour, who will always be respected here at Vicarage Road for his efforts in leading the team with dignity.

“However the Board feels that, with nearly half of the Premier League campaign remaining, a change in the Head Coach position now will give a new appointment sufficient time to work with a talented squad to achieve the immediate goal of retaining Premier League status.”

Despite the contribution of the Nigerian internationals in their folds, Watford have not been able to arrest a terrible start to the season.

Emmanuel Dennis has scored eight goals and provided another five assists, but it did not stop the Golden Boys from losing ten of their last 13 Premier League matches.

Troost-Ekong made 16 league appearances for the Hornets before he left for the 2021 Africa Nations Cup, while Etebo played six league games before he suffered a lengthy injury that has kept him out of action for months.

Dennis would have been part of Nigeria’s short-lived adventure in Cameroon following his excellent start to life in England.

But Watford stopped the former Club Brugge man from joining up with the Super Eagles in Cameroon due to an administrative error. The 24-year-old is yet to score or assist a goal in January.

Following Nigeria’s elimination from Afcon 2021, Troost-Ekong is expected back in the country on Monday, from where he will likely return to England in the coming days.

Watford currently sit in 19th position on the Premier League table with 14 points, only above bottom club Burnley and two points away from safety.