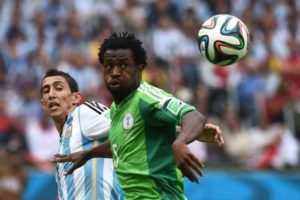 The Gernot Rohr led Super Eagles are back in the African biggest football tournament, after missing the last two editions and book makers have tipped the team as one of the favourites for the title.

The three time African Champions will parade players who will be making their first appearance at the tournament, except Mikel Obi and Ahmed Musa who were part of 2013 squad that won the tournament in South Africa.

“Mikel is the captain and also a leader in the team, he has also seen it all so his experience will be very crucial for the Super Eagles.”

“There are so many players in the squad who are playing the competition for the first time, so Mikel’s presence will help propel them to give their best.”

Ambrose, who won the AFCON title in 2013 dismissed claims that the team is young and inexperienced, he stressed that the team must have the hunger and desire to excel at the tournament.

“In 2013, no one gave us a chance because people felt we were inexperienced,” he continued.

“I believe this squad has got the belief, zeal, passion and hunger and will be hoping to repeat our feat in South Africa.

Nigeria begin their 18th appearance with a clash against Saido Beraino’s led Burundi on June 22 in Alexandria.