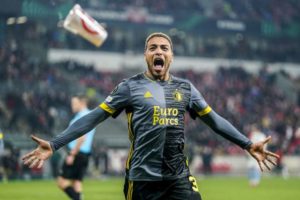 Feyenoord and Nigerian international Cyriel Dessers is thrilled to win Feyenoord’s Player of the Month and Goal of the Month awards for November.

Dessers who celebrated his 27th birthday on Wednesday scored four goals in five games for Feyenoord in November.

The Nigeria international scored all four goals while coming on as a second-half substitute.

The forward started November with an instant impact after coming off the bench to score the match-winning goal that gave Feyenoord a 2-1 victory over Taiwo Awoniyi’s Union Berlin in the Uefa Europa Conference League.

The striker netted a late winner in the 1-0 win against AZ Alkmaar on November 7 following his introduction in the final 10 minutes.

Dessers then fired a brace in the 2-2 draw against Slavia Prague on November 25.

And the first of his brace in the 2-2 away draw against Slavia Prague in the Europa Conference League, was adjudged the best for last month.

“I really like this and I’m really proud of it. I’m glad the fans thought of me. I’m going to give this prize a very nice place,” Dessers he the club’s website.

“It was a fantastic month for me. We had lovely evenings in Berlin and Prague. The fact that I could be important is extra nice to me.”

He joined Feyenoord on a season-long loan from Belgian club KRC Genk this summer.