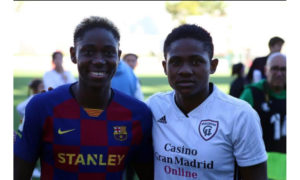 Okeke joined Madrid from NWPFL side FC Robo in the summer of 2018 and had become a regular for the team this season.

The 19 year-old was making her 7th league appearance on Saturday, but unfortunately it came to an abrupt end.

Although the nature of the injury has not been confirmed by the club, the defender herself tweeted confirming she could be out for a spell.

Meanwhile, Barcelona went on to trounce their host 4-0; with Asisat Oshoala scoring a brace, before 2,000 spectators at the Centro Deportivo Municipal Luis Aragonés.