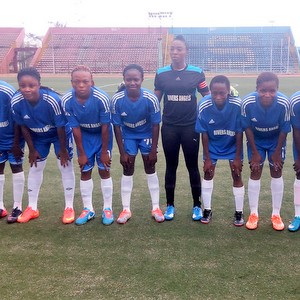 Nigeria's representatives in the inaugural CAF Women's Champions League, Rivers Angels have been drawn in Group B along with South Africa's Mamelodi Sundowns, ASFAR of Morocco and Vihiga Queens of Kenya.

Speaking on the draw, Nkwocha described all the teams in Group B as 'good' but sees her former club, the reigning Nigerian Women's Premier League champions Rivers Angels and Mamelodi Sundowns making it to the knock-out stage.

"I think that group it's gonna be tough because all the teams that have qualified are good teams," the former Sunnana SK disclosed to goal.com.

"However, I believe in Rivers Angels because I have seen them play in (in recent times). I feel Rivers Angels and Mamelodi Sundowns will come out of the group," observed the former Super Falcons star player.

Similarly speaking, Sundowns Coach, Jerry Tshabalala, confirmed the readiness of his team to conquer the continent.

"We are ready to go to Egypt and conquer Africa," began Tshabalala. "If one wants to be a champion, you will need to play against strong opponents. We find ourselves in a very tough but exciting group."

Tshabalala said he was able to watch both Queens and (Rivers) Angels handled by Edwin Okon during the qualifiers, leaving Moroccans ASFAR as something of an unknown quantity.

"The only closed book is ASFAR - we will we need to go out there and find out how they play, how they apply themselves," he said. "We are doing our homework and looking forward to representing South Africa."

The line-up for the maiden finals was decided after Malabo King of Equatorial Guinea clinched the last place earlier this month, with all the teams bar hosts Wadi Degla qualifying through regional events.

Rivers Angels, Hasaacas Ladies and AS Mande made it through from west Africa, ASFAR from the north, Malabo King from the central area while Sundowns Ladies and Vihiga Queens from the south and east respectively.

Queens Captain, Enez Mango, agreed with Tshabalala that not only is Group B 'very competitive' but that learning about opponents ahead of a new competition is equally challenging.

The 2021 CAF Women's Champions League takes place from November 5 to 19.