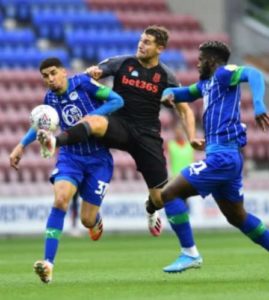 Super Eagles defender Leon Balogun is proud to be a part of the Wigan Athletics squad that set a new home win record in the English championship.

Balogun was in action for Wigan Athletic in their 8 – 0 mauling of Hull City at the DW Stadium on Tuesday.

The remarkable result is both Wigan’s biggest league win, surpassing a 7-0 victory against Oxford in 2017, and Hull’s joint-biggest league loss.

The Latics became the first side in the English top four tiers to scored 7+ goals in one half of football since Watford v Blackpool also in the Championship in January 2015.

They also became the first team to score 8+ goals at home in a single match in the English second tier since Manchester City in November 1987 (10-1 v Huddersfield).

Balogun said immediately after the game that he’s proud of the records they set and he’s looking forward to success with the team.

“Back with a bang 💥 whatever happens: I’m proud & grateful to be part of THIS team at that time! The character of the team is simply amazing & I wouldn’t want to miss it! This win is for everybody working for, supporting and loving this club!”, He posted on social media.

The emphatic victory left the Latics, with two games remaining, on 57 points, 12 points clear of 22nd place – occupied by Hull.