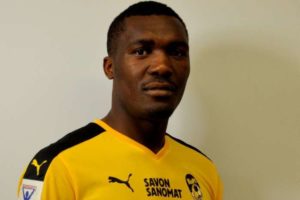 Former Nigeria international defender Azubuike  has linked up with Rivers United on a one-year deal.

Egwuekwe has also played for NPFL clubs, Nasarawa United and Warri Wolves in the past.

The towering central defender was an unused substitute as Rivers United was forced to a 1-1 draw by CAF Champions League campaigners, Enyimba in friendly in Aba on Monday morning.