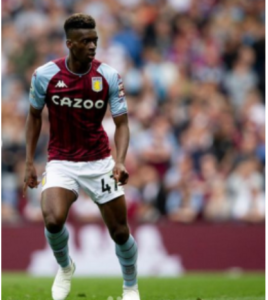 Through their official website, Aston Villa have confirmed their squad numbers ahead of the start of the 2022-2023 English Premier League season.

Carney Chukwuemeka ended a six-year association with Aston Villa on Thursday after completing his move to Chelsea.

Chukwuemeka's number 33 kit has not been assigned to any Aston Villa player as of now.

His England U19 teammate of Nigerian descent Tim Iroegbunam is still a player of Aston Villa for the time being amid speculation linking him with a temporary departure from Villa Park before the summer transfer window closes for business.

Iroegbunam will wear the number 47 jersey for the new season, just as he wore during the 2021-2022 campaign.

The 19-year-old was called up for twenty-two Premier League games last term and was given minutes against Brighton & Hove, Leicester City and Norwich City.