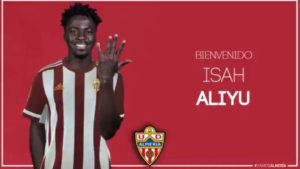 Spanish second division side have announced the signing of former Remo Stars attacker Isah Aliyu from Armenian side Lori FC bringing to two the number of Nigerian players at the club who are aiming to return to the Laliga next season.

Aliyu was signed on a five year deal and it came one week after the club agreed a deal to sign Nigeria youth international defender Valentine Ozornwafor on loan from Galatasaray with the option of signing him permanently next summer.

Nickamed “Di Maria” due to similarities in his style of play and that of Argentina winger Angel Di Maria at PSG, he started his career at a local team in Kaduna called Kakuri United before teaming up with the youth team of Remo Stars where he progressed to the first team.

20 year old ‎Aliyu who predominantly plays with his left foot joined Lori in March 2018 and in his first season at the club he scored 7 goals in 29 games but with three games played before his move to Almeria he is yet to register a goal.

Quick, strong and skilful, he can operate as a midfielder, on both wings or behind the main striker as he has played in the above mentioned positions in the two and half years he has played professional football