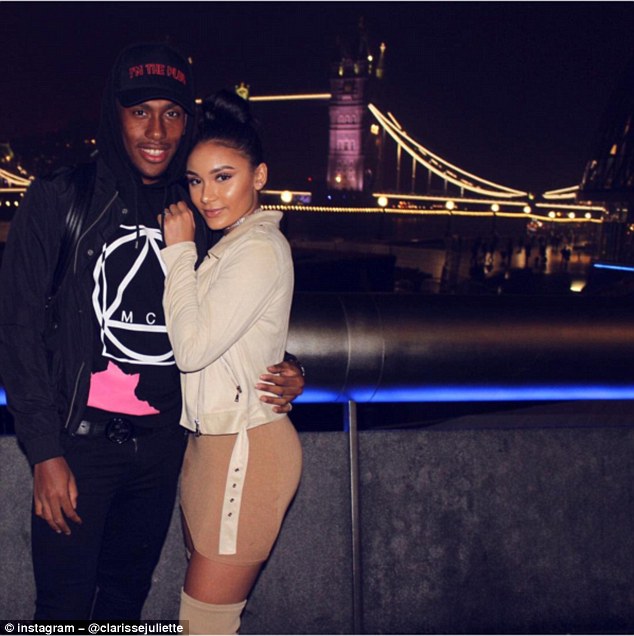 Alex Iwobi has plenty to smile about on the pitch this season - he has a regular starting place in an Arsenal side second in the Premier League and top of their Champions League group.

But he has a lot to be pleased with off the pitch too, if his girlfriend's Instagram pictures are anything to go by.

Clarisse Juliette posted a snap of the couple cuddling on a night-out in central London at the weekend, hours after Iwobi's team had beaten Sunderland 4-1.

Ms Juliette captioned the picture, which shows her and Iwobi with an iconic London landmark in the background: 'tower bridge tonight with my favourite man'.

It is not the first time the young couple have appeared loved up in personal snaps on her profile.

Earlier this month Iwobi and Ms Juliette posed for the camera again, looking particularly photogenic. This picture was captioned: 'When you and your bae don't need filter, just the flash.'

While Iwobi looks relaxed alongside his partner, Arsenal manager Arsene Wenger wants the young Nigerian to show the same level of composure on the pitch in order to score more goals.

Wenger said last week before the Sunderland game: ‘You can see that he is not a typical winger. I think he can play in the No 10 role. He turns the game forward, he passes the ball through the lines very well, he has a final ball in him.

‘I think he has it all in the locker to pass and give the final ball — what you want from him now is the finishing, and that’s still a little part that is missing. He is too nervous at the moment when he has the possibility to finish.’