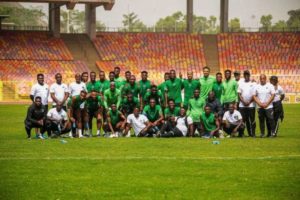 Ahead of the 2021 Africa Cup of Nations game against Sudan on Saturday, Super Eagles defender Ola Aina has revealed that the team will take each game like a cup final.

Aina made this known in an interview with the team media officer, where he said that the players are well focused on the next game against Sudan.

Recall that the Torino star played all 90 minutes in Nigeria’s 1-0 win over the Pharaohs of Egypt on Tuesday.

“We want to win for our country and ourselves.

“We will take it game by game. We need the same concentration and quality in the next match.”