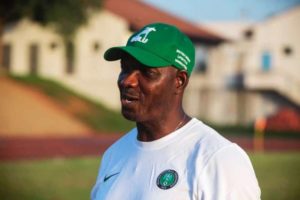 The Liverpool star failed to make much impact in the game with his side going down to a 1-0 defeat.

Much was expected from the forward following his superlative displays for Liverpool this season, but he was marked out of the game by the Super Eagles.

Eguavoen has now shed light on how his team tamed Salah in the game.

“Our main objective was to win the game, cut off Salah and keep the ball and we did all that,” Eguavoen said after the game at the Stade Roumde Adija, Garoua.

“We played direct and we also kept the ball.

“We will continue to approach each game as a cup final.”

Nigeria’s next game in the 2021 AFCON finals is against Sudan on Saturday.