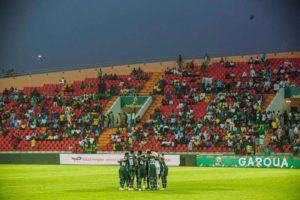 This is the Super Eagles that everyone wants to see, says Jay-Jay Okocha after Nigeria’s convincing 1-0 victory over Egypt on January 11.

“This is the Nigeria that we want to see, going out there dominating games and showing their ability to compete especially when it comes to their understanding about the tactical side of the game,” Okocha told SuperSport.

Okocha added that interim Super Eagles coach Austin Eguavoen has found that element that was previously missing in the team.

“Eguavoen got it right. He got the right balance and we played as we should be playing, which is dominating possession and dominating the physical side of the game,” Okocha said.

“And then the skilful players that we have. Moses Simon for me he was the man-of-match. There was no contest and he was excellent,” Okocha said.

“He tormented their full-backs and created the goal and I think all in all we made a good start and don’t forget that we played against one of the favourites in this tournament.

Nigeria plays Sudan on January 15 in their penultimate Group D match that would seal their last 16 spot.