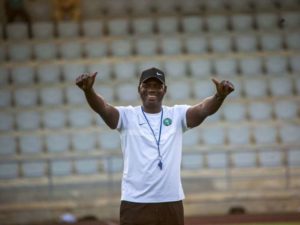 The Confederation of African Football has named Nigeria’s interim coach Augustine Eguavoen the best manager at the group stage of the ongoing Africa Cup of Nations.

CAF announced this on its website after AFCON 2021 group stage, saying that its Technical Study Group shortlisted the Best of the Group Stage.

He was awarded for winning the three matches at group stage.

Eguavoen-led Nigerian team have been outstanding at the ongoing Africa Cup of Nations.

Nigeria had eased into the Round of 16 as group leaders, with a match to spare, courtesy of the wins over Egypt and Sudan in their two matches and the combination of other results, notably Egypt’s defeat of Guinea Bissau on Saturday.

Despite that, the team defeated Guinea Bissau 2-0 to record 100 per cent victory in their group stage.

Apart from Eguavoen, others who bagged awards are:

Former Eagles’ captain Eguavoen featured for the Nigeria senior team for 11 years, between 1987 and 1998, during which he lifted the Africa Cup of Nations in 1994, held aloft the Afro-Asian Cup the following year, played in three AFCON finals (it could have been six but he missed the 1990 finals in Algeria; Nigeria withdrew from the 1996 finals and; was barred from the 1998 competition) and featured at the 1994 and 1998 FIFA World Cup finals. He won a total of 51 senior caps.

As coach, Eguavoen was assistant to another former captain Christian Chukwu when Nigeria finished third at the 2004 finals in Tunisia, then led the team to win another bronze in Egypt two years later. He is one of only 15 indigenous coaches to have taken charge of the Senior Men National Team of Nigeria, and also one of the 15 African coaches at these finals in Cameroon.

As Head Coach, the hard-as-nails defender has the most win-record with the Super Eagles, winning nine of his 12 matches in charge between 2005 and 2007, and is one of only three coaches to have steered an African country to the top 10 of the FIFA rankings (the other two being Clemens Westerhof and Egypt’s Hassan Shehata).

On Thursday, Eguavoen waved aside the record of his being the only Nigeria coach to have led the Super Eagles to win all three group phase matches at the AFCON, when his wards steamrolled Ghana, Zimbabwe and Senegal in Egypt 16 years ago.